IS YOUR BABY SPITTING UP TOO MUCH? COULD IT BE ACID REFLUX? HERE IS YOUR  ANSWER TO WHAT IS REFLUX IN BABIES AND GET NATURAL REMEDIES TO HELP YOUR BABY

As a new parent, you may be wondering why my baby is spitting up? Well, be ready for more laundry until your baby is 4-6 months old. Spitting up is common in infants, usually there is nothing to worry about. But frequent and persistent spitting up, along with poor weight gain can be a sign of acid reflux in babies.

Let’s get to bottom of all your questions and much more,

My baby spit up a lot..should I worry about it?

Nearly 40% of normal, healthy baby spit up after feeding. Spitting up, also called gastroesophageal reflux (GER) or physiological reflux, is common in babies, occurs throughout the day in infants.

My son was a big spitter. He was exclusively breastfed and he would spit up after every feed. I was worried and convinced that he was starving since he was spiting after every single feed. Despite all the spit up, he was never fussy and was gaining weight. My pediatrician reassured me that he is healthy and spitting up due to GER.

Babies often spit up when they are over fed or get too much milk too fast. This may happen when mom’s breasts are too full or baby feeds aggressively.

If baby is pulling off the breast or fussy at the breast, she may swallow air and spit up more often. Some babies spit up more when they are teething or starting solid foods.

If you are worried about quantity of spit up, than you shouldn’t. It may look like a lot and makes you wonder if baby getting enough milk or tempts you to feed again. You might be surprised to know that, most spit up is only a teaspoon of liquid, according to our pediatrician.

Baby spit up usually drools or spurt out of their mouth. Occasionally, baby spit up forcefully or projectile. Frequent spiting up or vomiting without any other condition – is called acid reflux or gastroesophageal reflux disease (GERD). This is mostly due to anatomy of digestive tract in infants.

If baby is a ‘Happy Spitter’(without discomfort, content and gaining weight),than spitting up is a laundry and social problem rather than a medical issue (source).

What causes GER/reflux in babies?

Wondering, why some baby spit up a lot? Most babies have some level of reflux during first year.

Most common causes of GER or spit up are:

Babies spit up because…they are just being a baby. The lower esophageal sphincter muscle that separates esophagus and stomach is underdeveloped in babies. Which allows content of the stomach wash back into the baby’s food pipe – esophagus and sometime throat- causing spit up or GER.

Sometimes, mama’s breasts are too full and its hard for baby to keep it up with milk flow. It can cause baby to take in excess air while swallowing all that milk. Overactive letdown can also cause baby to take in air while feeding. It can be easily remedied by pumping out some milk before feeding or trying different breastfeeding positions. If you are bottle feeding, make sure you have slow flow nipple and try paced bottle feeding.

Sensitivities to food or milk can also lead to excessive spitting in babies. Look out for allergies to cow’s milk or something in mom’s diet (if you are breastfeeding).

What causes GERD/Acid Reflux in babies? 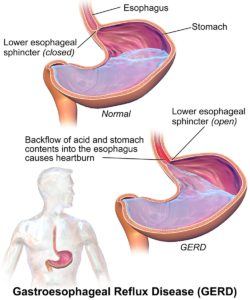 As mentioned earlier, reflux in babies is due to poorly coordinated digestive system. Anything that causes the lower esophageal sphincter to relax, can cause GERD. GER becomes GERD or Acid reflux when acid in the reflux irritates or injures the esophagus. Remember that GERD is not as common as GER. Approximately one in 300 infants shows abnormal signs and symptoms of GERD (source).

Many infants with GERD are healthy. However, some infants can have problems affecting their nerves, brain or muscles. Most infants grow out of the condition by their first birthday.

There are two types of reflux in babies; Acid reflux and Silent reflux.

Silent reflux causes stomach content to go as far as esophagus and than swallowed back so no spit up. It usually causes physical discomfort, hiccups, choking, bad breath and frequent burping.

If your baby has a GERD, he is at increased risk for GERD when he is older. It is more common in infant with family history of GERD.

How do you know if your baby has GER or GERD/Acid reflux?

Symptoms may vary, here are some common ones to look out for. Diagnosis of GERD may require doctor’s intervention.

How Acid reflux/GERD are diagnosed?

In most cases of reflux, no diagnostic test is required. Medical history of infant given by parents – symptoms that occur regularly-is usually enough for doctor to diagnose Acid reflux in babies. Further testing may be recommended if required.

This is X-ray test. The baby is required to brink barium that highlights the esophagus, stomach and upper part of small intestine. Barium highlights any obstructions in these areas in X-ray.

A long, thin tube with prob is inserted in esophagus via mouth in lower part of esophagus. The prob measures level of stomach acids and breathing problem if any as a result of GERD.

A baby is required to drink milk or eat food mixed with radioactive chemical. This chemical is followed through the digestive tract using special camera.

Diagnostic tests for reflux are invasive and usually doctors do not go for it unless it is necessary. With doctor’s advice you can try natural remedies or some changes in lifestyle.

Natural remedies for Acid reflux/GERD are not aimed at curing the condition but to help baby feel better until she outgrows it.

This post contains an affiliate links. As an affiliate and Amazon associate, I earn commission on qualified purchase at no extra cost to you.

Try feeding baby in upright position – called the koala or upright football hold while feeding. This position ensures that milk goes into stomach rather than staying up in the esophagus reducing spit up. A Boppy pillow can be helpful for positioning baby upright after meals.

Try lots of skin to skin contact or breastfeed in motion if baby is fussy and refuses to feed.

Don’t switch breast often when baby is actively sucking. Switching sides too often can cause excessive spitting up.

Allow baby comfort sucking at the breast or offer pacifier after feeding, since it reduces irritation and speeds gastric emptying.

Make sure to burp baby frequently after each feeding. My grandmother suggested burping baby at least 2 times after feeding. I know that sounds crazy (I thought so too!!) but worked for my son. He was less gassy and reduced spit ups.

If your baby seems fussy at feeding, stop and burp your baby and than begin feeding again. Try burping baby every 5 min if you are breastfeeding or early ounce if you are bottle feeding. 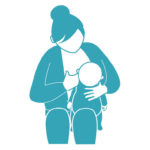 Avoid compressing baby’s stomach while burping as it can increase reflux. Try another position of burping such as—support baby’s chest and head with one hand by gently holding your baby’s chin in your palm (not throat). Use other hand to pat your baby’s back.

Check out this video to learn about burping method.

If baby is uncomfortable laying on his back, swaddle her and put her in rocker/sleeper. Several research studies have compared various positions to determine which works best for babies with reflux(source, source). Studies have shown that lying baby on the left and baby on his tummy helped reduce reflux significantly. These should ONLY be done when baby is awake under continuous monitoring. These positions should be avoided during sleep due to the increased SIDS risk .

Dress baby in loose clothing with loose diaper waistbands. While changing diaper, roll baby on his side rather than lifting legs toward tummy.

Probiotics can boost health of the gut thereby improves digestion. Including me, some mothers have seen improvement in acid reflux symptoms after feeding probiotic supplements (L.reuteri) to their babies. Research study has shown that giving infants a probiotic during first three months of their lives can improve colic, acid reflux symptoms and constipation (source).

Try switching formula if you are formula feeding your baby. Try cow milk free formula or ask your doctor for better option.

Aethusa cynapium is herb used in homeopathy to treat digestive issue. Aethusa is especially beneficial for infants who have a problem in digesting milk resulting in spit ups or vomiting.

I have used Aethusa 200x for acid reflux in my 2 months old son and it was like a miracle. I was little hesitant to give my 2-month-old baby anything that is not breastmilk, but I am glad that I made a choice with doctor’s permission.

He was much better at 4th month, stopped spitting up or showing any other symptoms of acid reflux. I gave him five globules dissolved in 1 tsp of breastmilk three times a day for 5 days.

Some moms have also benefited from use of Nat Phos a natural cell salt for acid reflux in their babies. Nat Phos 6X is a natural cell salt that aids with digestion. Some babies don’t make enough of it. Consult your doctor before administering homeopathic remedies to your infant. Dissolve ½ tablet in breastmilk (1 tsp) or formula and give it to baby with syringe.

Some moms also tried Gripe water or Colic calm successfully for baby reflux. Although it did not work for my son’s reflux.

Are there any medication for infant reflux?

Keep in mind that they can occasionally cause side effects such as increased risk of intestinal and respiratory infections. These medications should only be used under doctor’s supervision in babies with GERD.

Baby cereal mixed with breastmilk or formula, has been used to treat reflux in babies. Thickening feeds may help food to stay down in stomach but it is not a good idea for several reasons.

Thickened formula or breast milk may reduce spitting up, but silent reflux is still present in babies. It may cause increased coughing after feedings and decreased gastric emptying time as baby’s digestive system is not ready for solids.

Your baby may take in less milk overall-decrease in nutrient intake– if you are thickening feeds. Early introduction of solid before 3 months increases baby’s risk for allergies, respiratory infections, type 1 diabetes.

How long does reflux in babies last?

Symptoms of GER or GERD usually shows up between weeks 2 and 4. They peak around 2-4 months of age and begin to subside around 6-7 months when baby begins to sit upright. And usually resolves by 12 months of age.

It may be exhausting to deal with reflux in babies but remember that they do outgrow it at some point. As always, watch your baby, take a note of what bothers your baby and what works best to ease the reflux in babies.

Did your baby have reflux? How did you diagnose it? What remedy worked for you?

Hey everyone. I’m Pranali- wife, mom to two adorable boys and a blogger.

From pregnancy to postpartum to money tips, I am here to help you through your motherhood journey in empirical way.

Learn more about me here

This information (including all text, images, audio, or other formats on empiricalmama.com) is not intended to be a substitute for informed professional advice, diagnosis, endorsement or treatment. You should not take any action or avoid taking action without consulting a qualified professional.  Always seek the advice of your physician or other qualified health provider with any questions about medical conditions. Do not disregard professional medical advice or delay seeking advice or treatment because of something you have read here a empiricalmama.com.

Scroll back to top